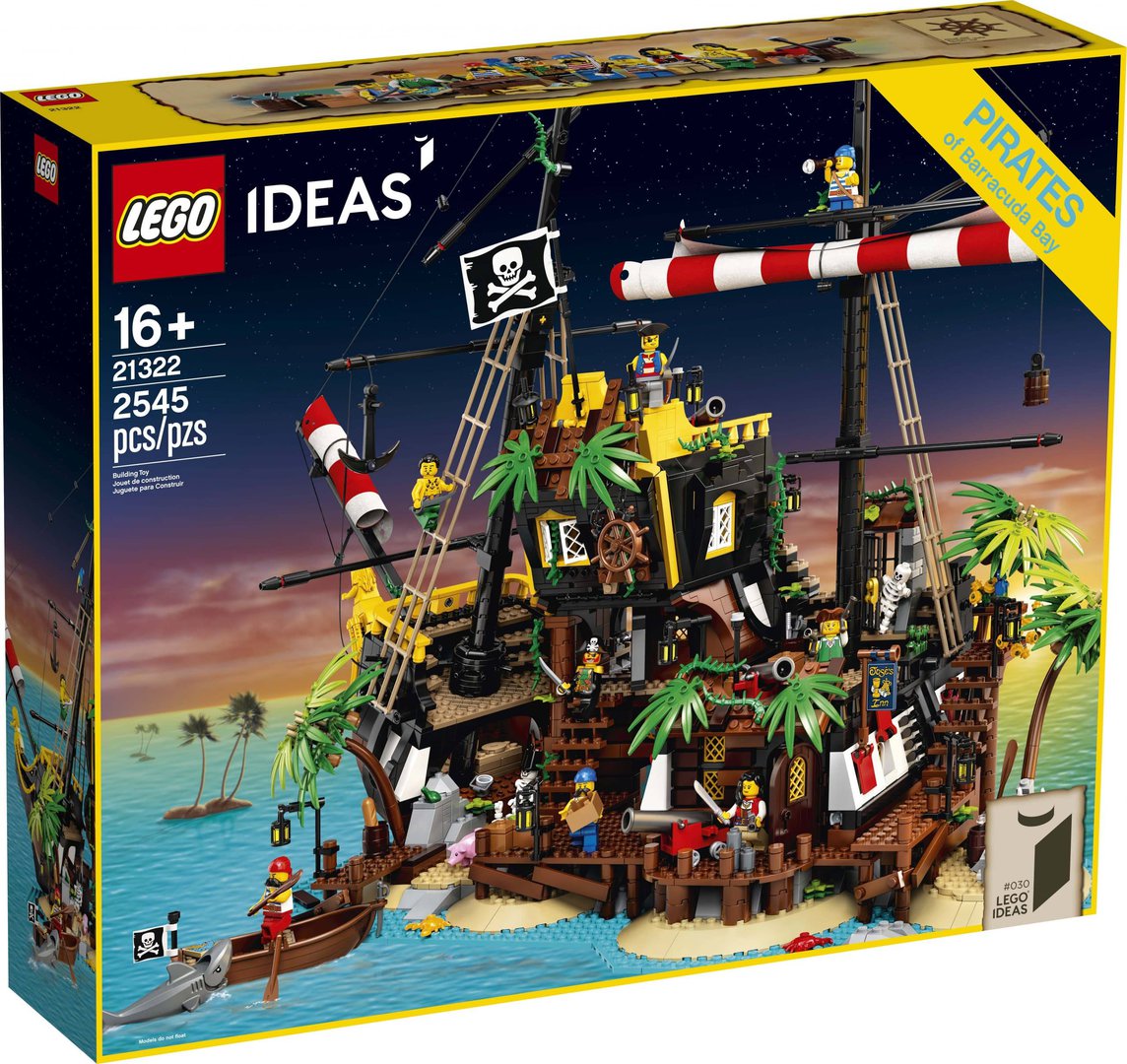 This LEGO Ideas set is going to be a must-have for anyone who loved the LEGO Pirates theme that was originally released in 1989. Today, LEGO has announced the latest LEGO Ideas set to be released is the LEGO Ideas Pirates of Barracuda Bay (21322). This set is available to purchase from the LEGO store on Wednesday 1st April, pricing can be seen below:

This set is a big one with 2,545 pieces in total. Within it, you will bet to see absolutely everything you could ever wish for from a Pirates LEGO set… This set was created by Pablo Sánchez Jiménez and his love of Pirates and LEGO showed throughout his LEGO Ideas submission with it just taking 25 days to reach the 10,000 supporter milestone! If you want to know more about Pablo you can read the official LEGO Ideas blog where they did an in-depth interview with him by clicking here.

You can also check out the other work that he has uploaded to his Instagram account from the below link to his latest post promoting his LEGO Ideas set.

A very nice addition to this set is the ship, not only does it look great in the main shipwrecked display but a surprising feature is that it can actually be put back together to make up Captain Redbeard’s spectacular ship which was inspired by the Black Seas Barracuda pirate ship from the original set in 1989!

Moving on to inside the ship you will not be disappointed with many hidden treasures (sorry I had to make a treasure joke somewhere lol). This really makes this set so versatile as it again brings in the fun factor which will really appeal to those who don’t want to have it as a showpiece.

Something that we should not skip over is the fact that this set comes with plentiful of minifigures,  these include Captain Redbeard, Lady Anchor, Robin Loot and twins Port and Starboard for pirate role-play action, plus a shark, pig, 2 parrots, 3 crabs, 2 frogs, and 2 skeleton figures.

So to finish this blog I would like to say that I am actually really quite excited about this set being released and it is one of my favourite LEGO Ideas submissions that has been released after reaching the 10k milestone and approved by LEGO. The LEGO Ideas Pirates of Barracuda Bay (21322) set is definitely worthy to have been picked and I am looking forward to seeing what Pablo builds next!

Will you be buying this set? What do you think about it? Drop a comment below to share your thoughts!

Whilst you are here don’t forget to take 5 minutes to check out our other blogs and our MOC shop, we are adding more and more FREE MOCs all of the time so don’t miss-out 🙂

The description of the LEGO Ideas Pirates of Barracuda Bay (21322) taken directly from the LEGO website can be seen below:

Rekindle nostalgic memories of childhood LEGO® construction projects with this LEGO Ideas Pirates of Barracuda Bay (21322) shipwreck island model for display and play. Enjoy some calm, quality time alone building – or share the fun with others.

Rebuild into a classic
Discover the captain’s cabin, food store, kitchen, bedrooms, supply dock, farm, toilet, jail cell, tavern and hidden treasure, plus lots of fun accessories, 8 pirate minifigures, assorted animal figures and 2 skeleton figures to inspire action-packed stories. This set includes an island that can be split in half and rearranged. The shipwreck can also be dismantled and reassembled to make a ship inspired by the Black Seas Barracuda pirate ship LEGO model from 1989.

Fan-tastic ideas!
LEGO Ideas offers a diverse array of sets, all created by LEGO fans and voted for by LEGO fans. Inspired by real life, action heroes, iconic movies, popular TV series or totally original concepts, there are cool model kits for people of all ages.